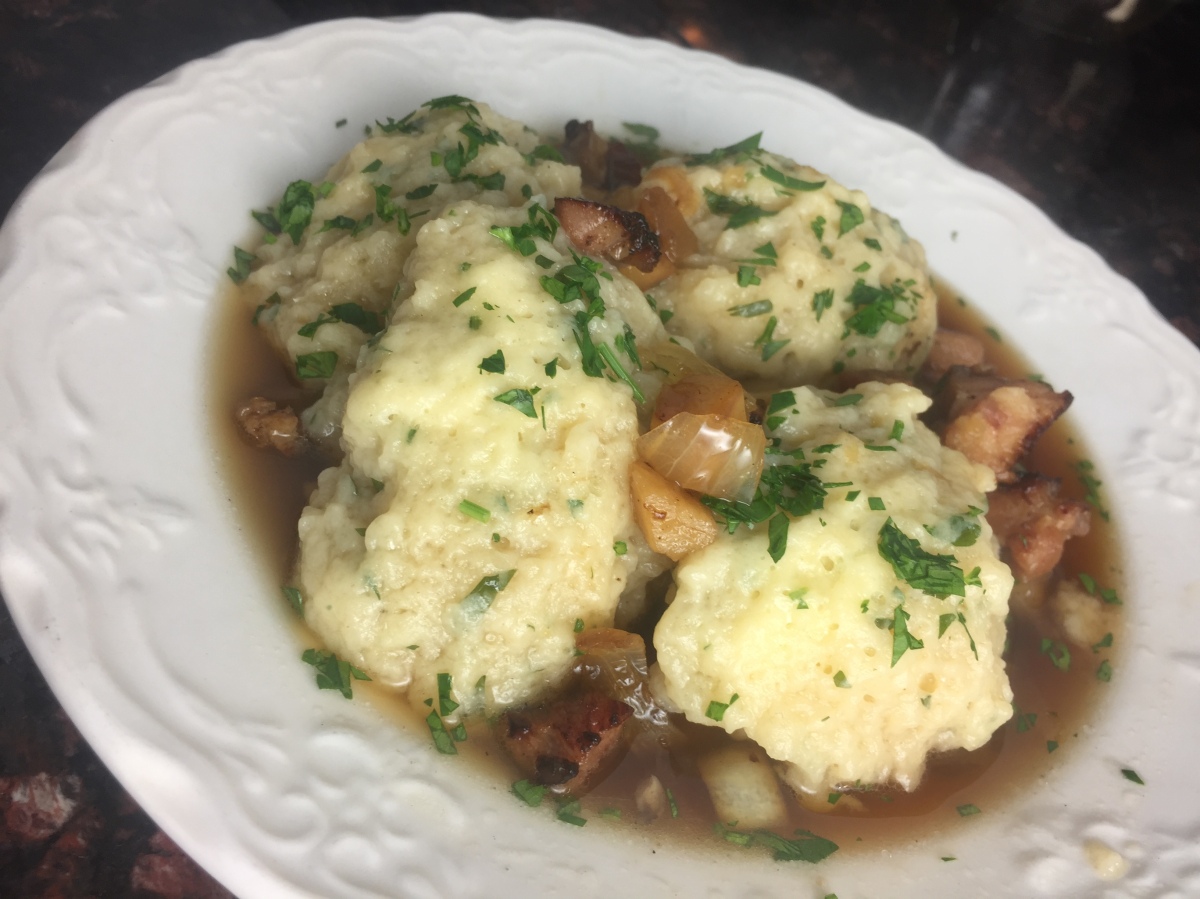 I’ve been going through old American cookbooks to find various dumpling soup recipes with a bit of history behind them (shout out to my homies at the Multnomah County Library! May you live forever.) I’ve found five or six different soup dumpling traditions that I want to explore & share with the world. I’ll be recreating the dumplings per the older recipes, and then making any necessary tweaks from there.

The Pennsylvania Dutch are such an interesting pocket of American culture. 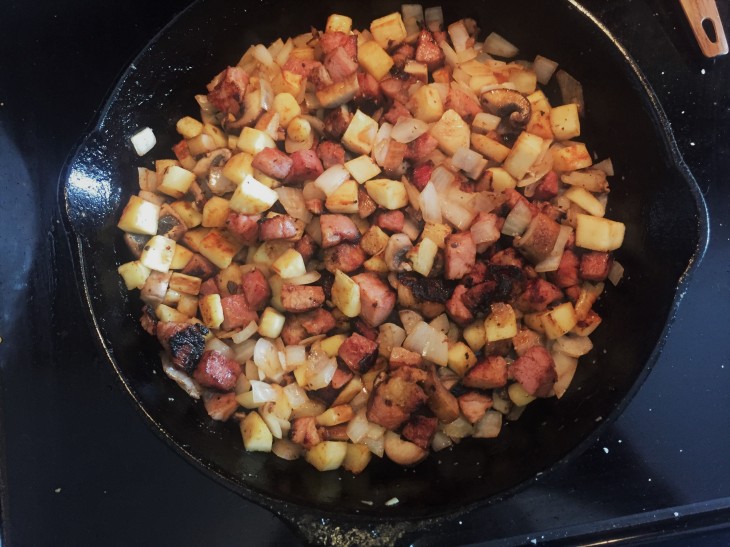 I’ve always associated Pennsylvania Dutch food and culture with the Amish, but that’s not terribly accurate. Most Pennsylvania Dutch descendants are Lutheran and various sects of Protestantism, as well as Amish & Mennonite peoples.

Their food is very practical and economical, but made by people who love eating and spend  their time living near their food supply. I’ve found lots of recipes for cheaper cuts of meat, as well as wild game – like squirrel! Delicious squirrel recipes that I am…scared to try…given the state of the squirrels I see in trees these days. (They are large and they eat pizza and pizza boxes.)

A few famous Pennsylvania Dutch recipes you might have heard of:

I adapted a dumpling recipe from Betty Groff’s Pennsylvania Dutch Cookbook. I changed her recipe just a scootch to make an ever so slightly drier dumpling that stays together in the soup better (AND can withstand a reheating the next day.) The rest of the recipe is similar in style to a few other recipes I found, but is mostly my own invention. Any opportunity to make a soup with parsnips & mushrooms I will take, and I will make.

Over and over, what ends up being the tricky part of dumpling soups is the ratio of STUFF. Getting the dumpling to soup to meat/vegetable ratios takes a bit of goosing, and a lot of pandering to the crowd. Everybody wants enough to dumplings, but also enough soup fillings. Some people want lots of broth, and some people want just enough for a wet dumpling. You also want to make sure that your dumplings are perfectly cooked, and that your soup vegetables aren’t complete mush.

The trick ends up being, of course, cooking your dumplings separate from the rest of your soup fillings. I know – this immediately sounds like a LOT of dishes. 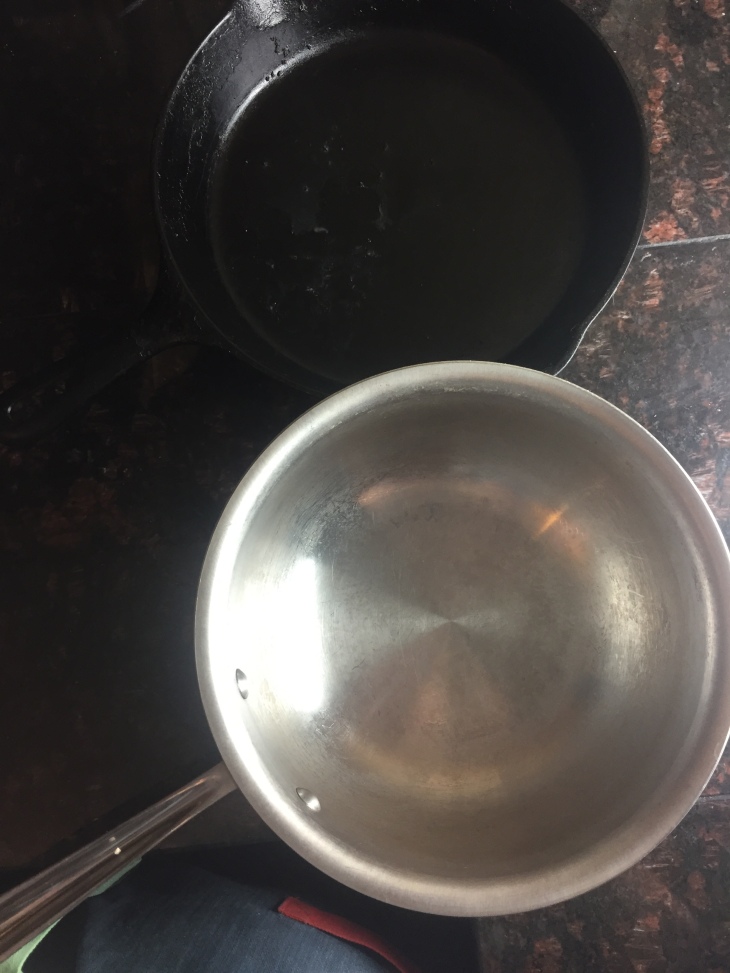 10″ skillet and a 3 quart saucier, but any 3 qt or larger pot with a lid will work perfect.

I promise that in this recipe I attempt to minimize the amount of dishes you need to make, and also get the perfectly cooked dumpling, deliciously cooked meats and vegetables, and enough flexibility with broth to suit anyone’s broth to solids ratio needs…though with that said, every home-cook should reserve the right to tell their beloved friends and family to “shut up and eat it.” 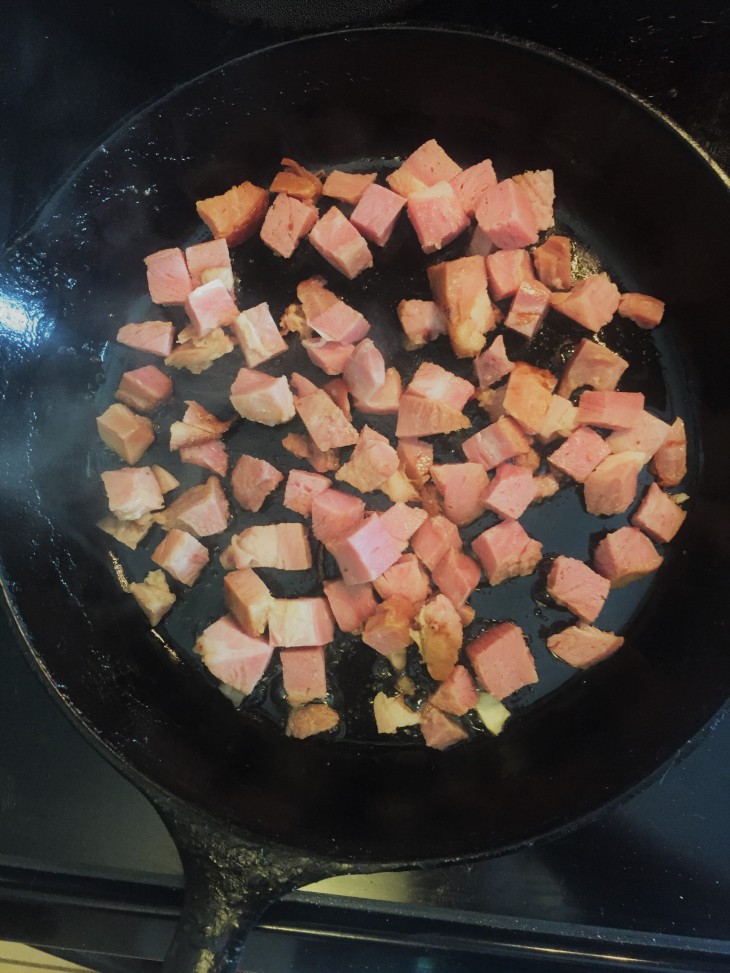 There aren’t a whole lot of ingredients in this soup, but it packs a real savory punch. From tweaking this recipe, there are a few details I found that really make a difference:

Here’s your best situation: You decide to make this soup in three days. You find a ham at the grocery store. It’s on sale. It’s a butt portion, or maybe it’s shank portion. You roast that puppy up. You carve off the meat, freeze what you aren’t using for this soup, and dice up a half pound of ham for the soup that you’ll finish making in a few days.

You take that brown, succulent ham bone that is probably leaking it’s marrow out at this point, put it in a stock pot with onions, with carrots, with celery, some bay leaves, heck, some parsley stems and thyme, and you make that rich, delicious, roasted ham stock. The next day your stock is ready.

You then proceed to make the soup because the pieces of your puzzle have come together. Also you have a house filled with ham smells and ham product.

Here’s a pretty cool situation: You find ham stock in your grocery store. I honestly never see it in stores, but it could certainly exist and also be delicious. Probably not as delicious as the one you could make at home, but y’know.

Here’s another good situation: You decide to make this soup later today. You go to the grocery store and buy 2 quarts of chicken stock.

You go to the deli counter and say “hey hey, can I get half a pound of smoked ham, sliced a 1/2 inch thick?” and they’ll be like:

“you makin’ soup or somethin’,”

…and you can choose how you answer, because maybe you wanna talk about it or maybe you don’t. Can’t anyone have privacy these days? Maybe you’ve building a moat made out of ham – they don’t need to know. Anyway, you take your stock, and your ham, and you go home, dice up the ham, and make the soup. It’s delicious.

Here’s a bad situation: You decide to not make the soup.

Like any soup – the more delicious the stock, the more delicious the soup. Be aware that if you do indeed make a broth from a roasted ham bone, it will probably be much saltier than any chicken stock. The ham has already been cured, and that will effect the seasoning of your soup – which isn’t a bad problem at all. What it means is that you’ll probably need to add more seasoning if you’re using a chicken or vegetable stock. 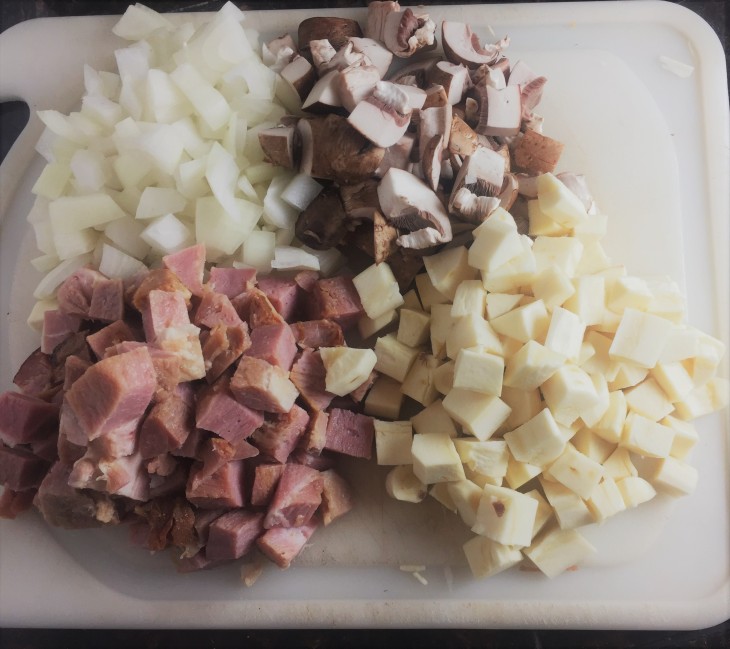 This recipe is really pretty simple, without very many ingredients, but it packs REAL flavor…and a lot of it is because you take the time to brown each vegetable separately. Could you just chop everything up, throw it into the pot, stir it around and add some stock? Absolutely, but you’d be missing out on a lot of complex flavor and opportunities to season the vegetables properly. The dish really doesn’t sparkle without the browning.

There are three important things to remember when you’re browning anything. 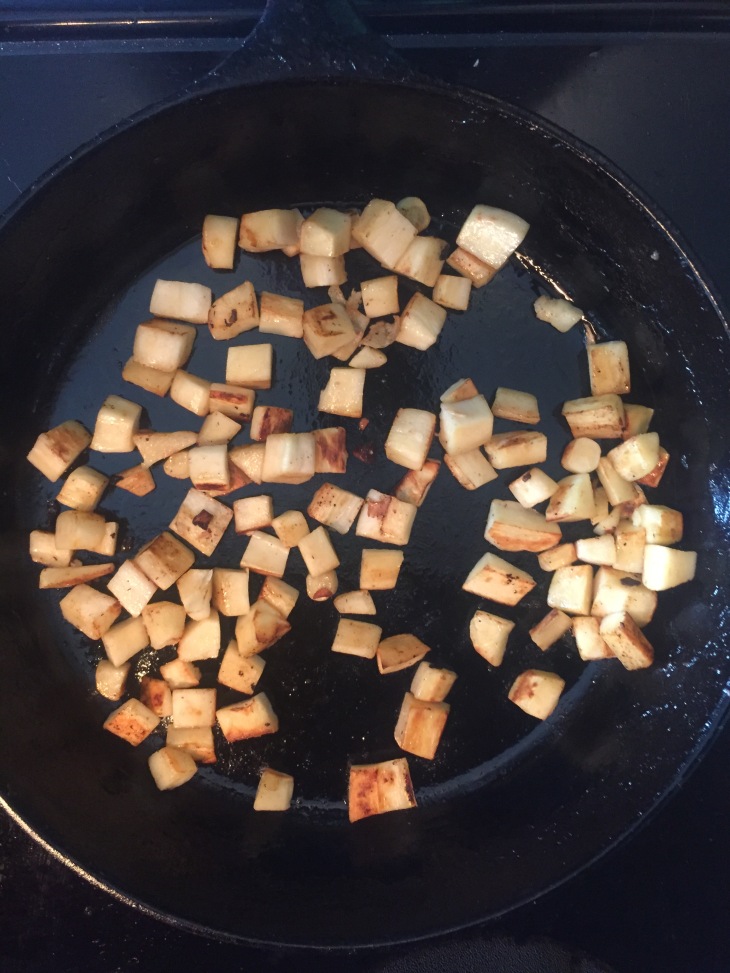 I adapted the recipe to make the dumpling a little firmer, and just ever so slightly eggy. You want a lovely, light dumpling, but I also liked the dumpling not being quite so soggy, and feel like this is a happy medium. I recommend cooking the dumplings for 15 minutes, with zero lifting the lid, and zero peeking, but then let them sit with the lid off and the heat off for a few minutes. Doing this helps the dumplings firm up and make it easier to scoop.

If you’re thinking to yourself, “hey, that looks like parsley! and the recipe calls for thyme!” You’re right. I ran out of thyme, and ran out of time to get thyme. So there you have it. Use thyme. It’s great.