Lucretia is currently airing out on a towel in my living room. She doesn’t smell great, nor does the tub I had her soaking in, which is airing out outside. I honestly don’t have a very good reason for “airing her out” right now; I just sort of wanted to stare at her while I figure out what to do next.

She sat in plain water for nearly two weeks, with me changing out the water every few days. The first two times changing out the water I did a lot of manual cleaning of meat, tissue, and sinus cavity gunk. She was starting to smell pretty funky, and I feel like my fingers smelled like bone for the rest of the day (my boyfriend said I smelled like bones. I didn’t think that was very nice.)

My last time checking her before today she was looking pretty clean & fancy, but there was some pretty strange neon yellow coloring between her eye & ear cavity (I think it would be the zygomatic bone if it was a human. Maybe they have the same name if it’s on a pig? I might never know.)

I’d heard of bones becoming strange colors during maceration, but never of neon yellow, so I went ahead and hit up Jana at the Bone Lust Blog to see what she knew. I haven’t heard back yet (not sure how often she gets on that blog anymore, but it’s still a tome of info and worth checking out).

I figured hydrogen peroxide would get rid of the color, so I went ahead and soaked Lucretia in the tub filled with water again, but this time adding about a cup of hydrogen peroxide. I let her go for about a week, and then pulled her out today.

First – she looks so clean! I see a teeny bit of gunk still in her sinus cavity, but a lot of the tiny meat bits stuck in the mandible are gone. She’s definitely lighter in color as well. 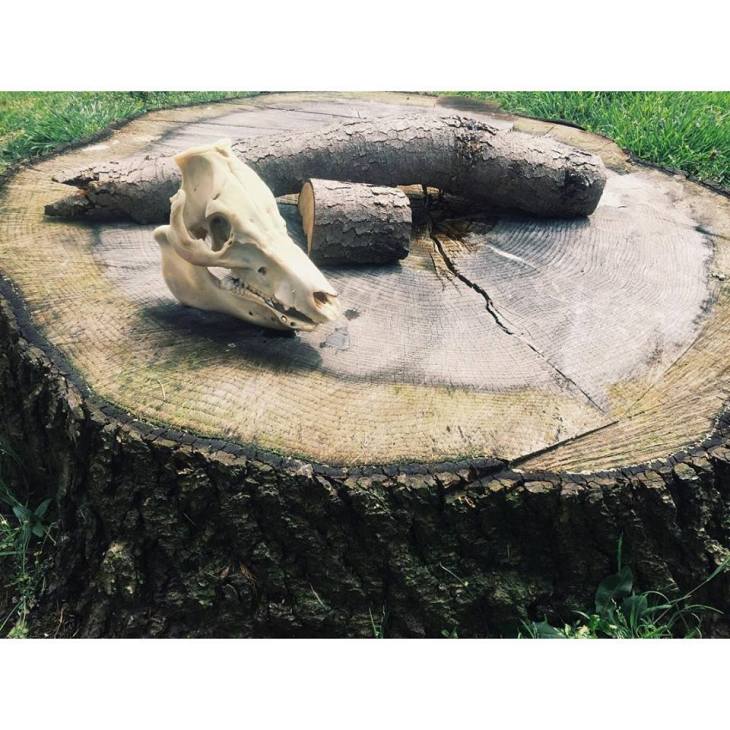 And here she is looking god-damn classy on top of a tree stump. I figured a pig skull and a tree stump might have a thing or two in common they could chat about. #severedremains

Anyhow, I was really happy when I pulled her out of the tub today. She’s starting to look like a very beautiful dead thing that anyone would be happy to have around their house. Right? RIGHT??